An exploratory fishing trip to a Bung Buk Lake saw Brendan and Boy venturing into the unknown.
The visit to a previously unfished water saw Boy and Brendan offering small livebaits in the form of freshwater shrimps in addition to method tactics with particle hookbaits.
With the lake rumoured to hold specimen sized Striped Catfish and Rohu in addition to Mrigal/Small Scale Mud Carp and other native predatory species the anglers fished a short afternoon session.
In a short period of four hours the anglers bagged several small Rohu as well as Mrigal to 12lb’s.
In addition to a rarely seen native predator in the form of a small Grey Featherback was caught by Brendan and weighed a mere 2lb’s. This highly unexplored venue will be receiving more attention from the team in the coming months in an attempt to ascertain its true angling potential. 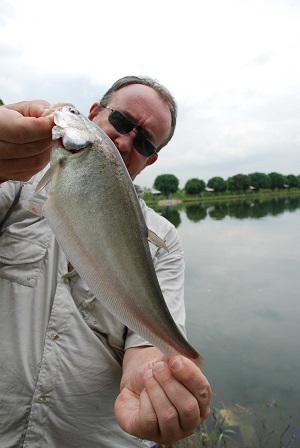