After suffering from a shoulder injury on his previous session Richard Larkin returned to Bungsamran Lake in Bangkok fishing for Mekong Catfish.
Returning to the public area Richard soon dispatched two sliding bungs into the central area of the lake.
A short time afterwards the sliding bung lurched into life as a Mekong Catfish powered off with the bread flake hookbait.
Richard made quick work of the fish bringing it to the net within five minutes of the initial take.
The fish was estimated to weigh 15kg’s and was released after a few quick photos.
With his shoulder injury now in remission Richard fished hard throughout the day amassing a large eighteen fish catch.
A change over to bottom fishing tactics in the afternoon saw a series of Striped Catfish brought to the bank with weights to 12kg’s.
Included in Richards Catfish haul were Striped Catfish to 12kg’s in addition to several Mekong Catfish with weights to an estimated 30kg’s 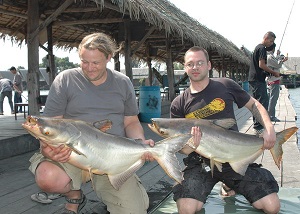