Visiting angler Tom Mills from Carolina in the United States ventured to Bungsamran Lake in Bangkok fishing for Mekong Catfish.
The US angler having previous experience with Catfish in the states was eager to sample the power of the Mekong Catfish.

Fishing from a private bungalow the angler fished two rods out into the central area of the lake baited with large balls of local groundbait laced with flavourings. After only five minutes the US angler was already into a Catfish which proceeded to charge towards the centre of the lake. Applying maximum side strain saw the fish turned from its path allowing the angler to regain much needed line onto the reel.
Fifteen minutes later the fish was netted on the first attempt by Boy and hoisted onto the unhooking mat.
The Mekong Catfish was estimated to weigh 20kg’s and was released after a short photo session.

Rebaiting the rods and casting back towards the centre of the lake saw another fish immediately hooked up. The US angler once again lifted the rod into the fish causing a massive bow wave to appear out in the centre of the lake. A dogged battle followed which saw the angler steering the fish clear of nearby snags on several occasions before the fish was finally netted. The Mekong Catfish on this occasion was estimated to weigh 25kg’s and found to be in perfect condition.

Tom fished for a full eight hour session capturing a further six Mekong Catfish to 18kg’s. In addition the US angler also accounted for several Striped Catfish with weights to a relatively low 10kg’s. Tom’s first introduction to the species left him extremely impressed by the sheer power of the fish and determined to return to catch a much larger specimen. 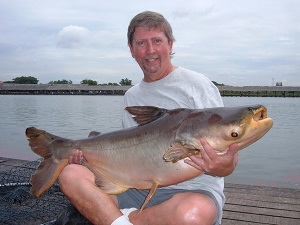