Bangkok angler Brendan returned to the highly prolific Bungsamran Lake in Bangkok fishing for Giant Siamese Carp.
Fishing from the public bank the angler presented popped-up hooks over large Fox method feeders packed with local groundbait.
With the marginal swim already heavily baited the angler baited lightly.
With the swim showing signs of fish activity the angler patiently waited for a run.
After almost an hour the right hand rod burst into life as line began to peel from the reel.
After clamping down hard on the unseen fish a large swirl was seen on the surface indicating a Giant Siamese Carp was the culprit.
Ten minutes later a large Giant Siamese Carp estimated to weigh 23kg’s was expertly netted by Jeab.
After releasing the fish the swim was rebaited before Brendan recast his rods onto the productive area.
With the passing of another hour and no more fish the rods were once again rebaited and repositioned in the margins.
Shortly after an extremely fast take saw Brendan once again doing battle with an unseen monster.
This time it was clear from the fight that this fish was much smaller than the previous fish and saw Brendan guiding a small Striped Catfish over the net.
With the slow pace of the mornings fishing Jeab decided to set-up a rod. Using the same tactics Jeab positioned his rod on the edge of the baited area.
Fifteen minutes later a screaming take on Jeab’s rod saw the local angler and guide attached to a large Giant Siamese Carp.
After a thirty minute battle which saw the fish try to enter the snags on several occasions a big carp was finally netted.
After hoisting the monster carp onto the unhooking mat it was clear the fish was an extremely big specimen.
With no scales on site a conservative estimate of 38kg’s was placed on the fish.
The days fishing continued at a relatively slow pace seeing Brendan landing a succession of small Striped Catfish and Pacu.
Jeab’s rod remained silent for most of the day before late in the afternoon another high speed take saw local angler Wit battling yet another Giant Siamese Carp.
After a short ten minute battle a lively Giant Siamese Carp of approximately 15 kg’s was netted 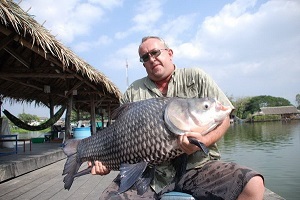