Calvin Tan a returning client and friend visted Bungsamran Lake in Bangkok in search of large Mekong Catfish.
The Singapore angler chose to fish from the public area using sliding float set-ups combined with inline feeders and Owner hooks.
After casting both set-ups out into the centre of the lake the angler waited for further developments.
Only minutes after casting out one of the floats seventy yards out into the lake disappeared beneath the surface.
Calvin wound down into the fish as it proceeded to power off towards the centre of the lake.
With the rod arching over at an alarming rate the angler held on as the unseen Mekong Catfish embarked on a series of unstoppable runs!
It would be a further twenty minutes before the large Catfish was finally netted and hoisted onto the unhooking mat.
The fish was in perfect condition and was estimated to weigh 40kg’s+.
After recasting the rods it was not long before another Mekong Catfish took a liking to the anglers bait.
The fight on this occasion only lasted ten minutes before Calvin safely brought another Mekong Catfish to the waiting landing net.
This time the fish was a much smaller 20kg specimen.
Calvin caught steadily throughout the day landing several other Mekong Catfish with weights ranging between 15-30kg’s.
In addition Calvin caught numerous Striped Catfish with weights of 8-12kg’s which all fell for his sliding float tactics.
At the end of the highly productive days angling Calvin had caught a nineteen fish haul consisting of Striped and Mekong Catfish with weights upto 40kg’s. 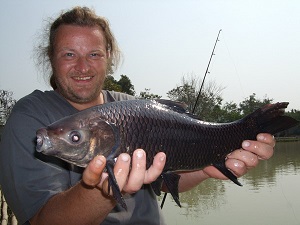