Canal fishing at the Mae klong River in Thailand.

Returning client Yoji after previously catching Giant freshwater stingrays on a trip to the Mae klong River, contacted us with regard to fishing the maze of canals adjoining the main river for native freshwater species.
Yoji wanted to fish for two native species, namely the Archer fish and Climbing Perch in addition to the numerous other freshwater species which inhabit the canals.
After making an early start Yoji was soon slowly exploring the network of canals guided by one of our local guides.
Fishing from a narrow wooden canoe the angler was soon casting small lures towards the overgrown bankside cover.
Several casts into the area soon saw something taking an interest in the anglers miniature lure before a small Striped Snakehead was quickly brought to the boat.
Further casts failed to produce any more action, so the angler decided to move onto the next likely looking holding area.
The next fishing area was down a very quiet overgrown section of the canal and saw the angler fishing with bread in a slack area of water.
It wasnt long before the delicate tip of the lightweight rod nodded and Yoji set the hook into the unseen fish.
Seconds later a small Archer fish was swung into the boat completing the first half of his intended species hunt.
Further casts into the area saw more action from the Archer fish with several more falling for the same tactics weighing 6-8 oz’s.
After a short break for lunch and refreshments Yoji continued his search for the elusive Climbing Perch and ventured further into the network of canals at the Mae klong River.
Concentrating now solely on the Climbing Perch, Yoji began fishing with small drop shots and lures which he slowly bounced across the bottom.
Several small barb were soon landed before the angler finally hooked his target species. The Climbing Perch although a relatively small specimen of 12 oz was quickly and humanely dispatched and kept for the pot.
Yoji having accomplished his preliminary goal now moved onto the second part of his plan and was soon in a riverside restaurant enjoying his catch freshly prepared by a local chef! 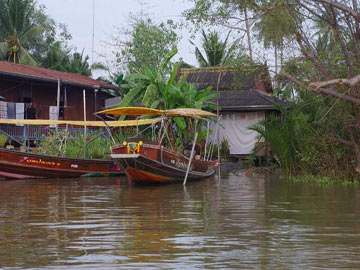