Expat Angler and Bangkok resident Brendan fished Bungsamran Lake in Bangkok for yet another session in search of Giant Siamese Carp.
Guided by Boy Brendan presented buoyant hookbaits over a heavily prebaited marginal area.
Fishing from the public bank Brendan landed several small striped Catfish before finally hooking his intended species. After a twenty minute battle which saw the fish entering the snags on several occasions the fish was finally netted.
The Giant Siamese Carp was estimated to weigh 18kg’s/39lb. Brendan would go on to capture six more Mekong Catfish with weights to an estimated 40kg’s in his short day session.
Brendan has not yet achieved his goal of a big Giant Siamese Carp and will be continuing his efforts in earnest to bank one of the larger Carp that Bungsamran Lake is renowned for. 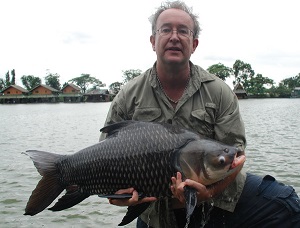