UK angler Richard Larkin returned once again to Bungsamran Lake in Bangkok.
Fishing from the public area Richard fished a combination of sliding float tactics and Method feeder techniques in an attempt to capture some of the lakes larger resident catfish.
Richard was soon into fish with a series of Striped Catfish taking a liking for his buoyant hookbaits. The UK angler caught a succession of Striped Catfish with weights between 6-12kg’s before the swim fell silent.
Continual recasting the sliding float to the centre of the lake saw Richard rewarded with several good sized Mekong Catfish with weights to an estimated 30kg’s.
A high speed take on a rod fished close to the nearby wooden supports of the platform saw Richard bent into an incredibly powerful fish.
A mass of bubbles broke the surface indicating a large Giant Siamese Carp had been hooked before the fish charged towards the snags. Richard turned the fish on the first occasion only for the Carp to change direction towards the nearby supports of the platform.
A sickening grinding sensation was felt through the rod as the fish ploughed deeper into the snags!
Seconds later the hooklink parted and the fish was gone!
After regaining his composure the angler continued to fish well through the rest of the day.
No further Carp action was experienced during the rest of the session, but the angler landed various Mekong Catfish to an estimated 30kg’s in addition to more Striped Catfish.
At the end of the days angling Richard had accounted for an eighteen fish haul consisiting of Mekong Catfish to 30kg’s and Striped Catfish to 12kg’s 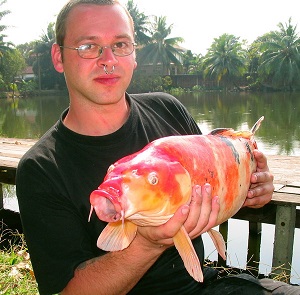