Carp and Catfish fishing in Thailand

UK newlyweds and fishing enthusiasts Nigel and Caroline began their fishing holiday with a visit to Bungsamran Lake in Bangkok fishing for Mekong Catfish and Giant Siamese Carp. Fishing from the public bank the newlyweds fished with sliding float setups and cast towards the numerous fish showing in front of them.
After only a matter of minutes the first fish of the day tore off with the bait creating a bow wave out in the centre of the lake.
Winding down into the fish saw the rod bent over double as the unseen Mekong Catfish powered off towards the far bank.
A ten minute battle ensued which saw the fish making a series of powerful runs towards the far bank.
On each occasion Nigel played the fish back towards the waiting net only for the a Mekong Catfish to power off on another run.
After repeating the process a few more times the Mekong Catfish was finally beaten and brought to the waiting net.
The Mekong Catfish was hauled onto the mat before having the hook removed and being displayed for the camera.
The good sized Mekong Catfish was estimated to weigh 20kg’s+ and released after photography.
Caroline was next up and was soon fighting a Mekong Catfish.
The Mekong Catfish on this occasion was a much larger specimen which took much longer to land.
Caroline’s Mekong Catfish was considerably larger than Nigel’s and was estimated to be in the excess of 40kg’s.
The days angling continued in much the same pattern with both anglers landing a succession of hard fighting Mekong and Striped Catfish upto 30kg’s.  At the end of the days fishing the UK newlyweds had amassed an eighteen fish haul consisting of Mekong Catfish to 40kg’s and Striped Catfish to around the 20lb bracket 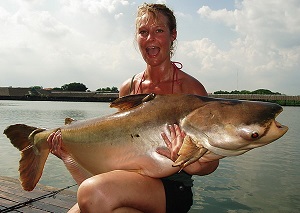