Carp fishing in Bangkok at Bungsamran

Twin brothers Jamie and Dan from the UK went carp fishing in Bangkok at Bungsamran Lake in Bangkok fishing for Giant Siamese Carp and Mekong Catfish.
The anglers chose to fish on the public bank and shared two rods which were fished over a large prebaited area.
Fishing with large cage feeders loaded with locally produced groundbait the brothers were soon into a succession of small Striped Catfish to an estimated 10kg’s.
After a lull in sport one of the rods burst into life as line was pulled rapidly from the reel.
Winding down into the fish saw a mass of bubbles erupt on the surface as what was now clearly a carp exited the swim.
After making a twenty yard run the angler managed to stop the fish in its tracks causing it to kite on a wide line towards the nearby supports of the fishing platform.
Quickly replacing the line back onto the reel the angler bent into the fish once again and steered it away from the danger area.
The unseen carp made several further attempts to enter the snags each time being expertly played back out into open water.
After almost fifteen minutes of battling the fish a large carp rolled over just out of netting range and was gently coaxed towards the waiting net.
On hauling the carp onto the unhooking mat the fish was observed to be a good size and was estimated to weigh 38-40kg’s.
After returning the carp to the lake the anglers continued fishing and both caught several good sized Mekong Catfish to 20kg’s+.
Later in the afternoon the anglers once again hooked another carp which proceeded to tear off across the lake on another high speed run.
The Giant Siamese Carp on this occasion was a slightly smaller specimen which was estimated to weigh 25kg’s. 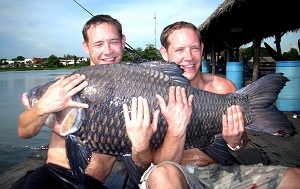