Martin from Belgium started his Thailand fishing holiday carp fishing bangkok Bungsamran Lake for Giant Siamese Carp.
On arrival at the lake the angler was soon fishing on the public bank with a large feeder packed with lam.
Fishing with a slack line in the nearby margin near the supports of the fishing platform soon saw line being ripped from the spool of the reel at an alarming rate of knots.
On clamping down into the unseen fish the fish changed direction and powered off across the lake creating a large wake in its path.
Martin held onto the fish for several more minutes before it began to slow down before he slowly but surely started to regain line back onto the reel.
After almost fifteen minutes the fish revealed itself on the surface as a muscular Mekong Catfish and was quickly netted by the guide.
The Mekong Catfish was estimated to weigh 30kg and was quickly released after a few pictures.
Martin landed several more Mekong Catfish before he received the bite that he had been waiting for.
A high speed take saw the angler quickly lifting the rod into yet another fish causing the water to explode as it the unseen fish exited the swim.
A massive swirl formed out in the lake as the unseen carp snaked its way out towards the centre of the lake.
The unseen carp performed several powerful runs out in the lake before the angler started to regain control over the fish.
A quick change of direction saw the carp heading directly for the safety of the fishing platform causing the angler to apply maximum pressure to keep the carp out of the snags.
After several fraught moments in the edge the Giant Siamese Carp was finally netted and hoisted onto the mat.
The Giant Siamese Carp was estimated to weigh 35kg’s and proudly held up by the captor before being gently released back into the lake.
Martin received no further action from the carp, but did land several more hard fighting Mekong Catfish as the days fishing continued. 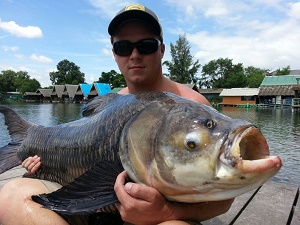