UK angler David visited Bungsamran Lake in Bangkok fishing for Giant Siamese Carp and Mekong Catfish.
After baiting large cage feeders presented under sliding bungs the angler cast out into the lake towards showing fish.
Minutes later the float was dragged under the surface as a Mekong Catfish moved away powerfully across the lake.
Winding down into the Catfish saw the rod pulled into its full battle curve as the Mekong Catfish charged towards the other end of the lake.
A ten minute battle followed which saw the angler skillfully playing the catfish closer and closer to the fishing platform.
After a few fraught moments at netting the fish was finally hoisted onto the unhooking mat to reveal a fat Mekong Catfish of an estimated 20kg’s.
The day progressed in much the same fashion seeing David and his partner landing a succession of hard fighting Mekong Catfish and Striped Catfish.
Both anglers landed Mekong Catfish to an estimated 30kg’s in addition to several Striped Catfish with relatively low average weights of an estimated 8kg’s.
At the end of the days fishing at Bungsamran Lake the anglers had amassed a double figure haul of Mekong Catfish caught on a combination of sliding float and bottom fishing tactics. 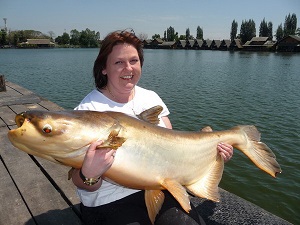