A short day visit to Bangkok at the start of his Thailand holiday saw UK angler Jamie fishing at Bungsamran Lake for carp and catfish.
Fishing from the public bank Jamie was soon casting out large baited feeders under large bungs.

With Catfish showing everywhere it did not take long before the float disappeared and line began to be pulled from the spool.
Winding down into the Mekong Catfish saw the rod bent into its full curve as a powerful catfish powered off with the bait.

A ten minute battle followed which saw a nice Mekong Catfish of 25kg’s brought onto the fishing platform.
After releasing the catfish the angler recast the rod and waited for further action.

Several more Mekong Catfish and Striped Catfish were banked in the following hours with weights ranging between 10-30kg’s.

Yet another cast saw the float once again buried beneath the surface and the angler winding down hard into the fish.
The fish on this occasion showed great speed as it zig zagged across the lake on course for the far bank.

After stopping the initial run the angler played the fish back towards him as it created large bow waves on the surface.
The rest of the battle was played out at close quarters with the as yet unseen Giant Siamese Carp managing to enter the maze of snags under the fishing platform before exiting the other side. 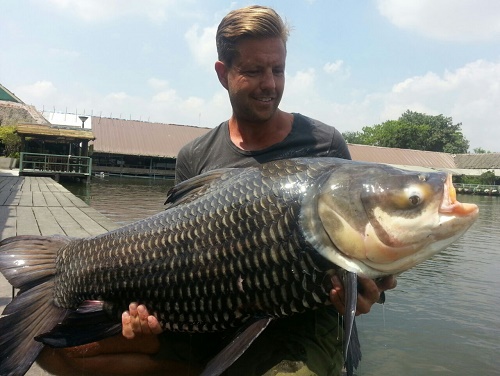