FishSiam pro-guide Ow carp fished with a client for Giant Siamese Carp, after a hectic days carp fishing with the client catching over fifteen Mekong Catfish the client had to leave in order to catch a departing flight.
Ow still having a substantial amount of bait left decided to continue fishing. Fifteen minutes after the clients departure Ow received a savage take which saw the unseen fish power off into the lake. A thirty minute battle commenced seeing the giant carp seek the sanctuary of the snags on various occasions. Aided by Min another FishSiam team member, the duo was forced to free the mighty beast on several occasions from the snaggy structures which surround the lake. Finally the giant carp was brought to the net by the exhausted anglers and photographs were taken the carp was weighed at 55 kgs 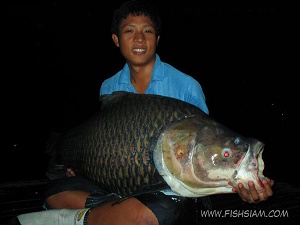