The first day of Li’s Thailand fishing holiday saw the angler carp fishing at Cha Am Fishing Park.
On arrival at the lake the angler was soon carp fishing a delicate float presentation with bread flake as hookbait.

The float was pulled under after only twenty minutes fishing by a nice looking Rohu of possibly 8kg.
Further casts in the nearby margins produced a few more Rohu of a similar size before the Mekong Catfish homed in on the area creating a bit of excitement.

After landing several Striped Catfish and Mekong Catfish the swim fell silent for a while.
Large bubbles began appearing over the marginal area betraying the arrival of the carp once again.

Watching the float intently the angler waited as it dipped gently on the surface, seconds later the float lifted out of the water falling flat on its side before being dragged back under the surface.
Lifting the 12ft fishing rod into the carp saw the rod pulled into full battle curve as the carp rapidly exited the swim.

As the line cut through the water a large bow wave could be seen out in the centre of the lake as a large Giant Siamese Carp ploughed towards the opposite side of the lake.
After the carp started to run out of lake it turned and motored along the far bank.

Continued pressure applied with the rod saw the carp once again turned this time heading back towards the near bank.
As line was quickly replaced onto the reel the rod once again took up its full curve as the final stages of the battle were played out at close quarters.

The carp surfaced on several occasions before finally being netted and hoisted onto the bank.
The stunning Giant Siamese Carp was estimated to weigh 20kg+ and was released after a few pictures.

The final carp of the day came in the form of a lovely Catla Carp which was estimated to weigh possibly 25kg. 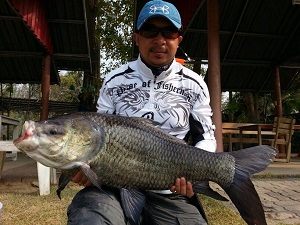