Bangkok resident Brendan fished Dream Lake in Chiang Mai for a three day session with Boy.
After prebaiting heavily with groundbait, maize and peanuts the anglers hooked a succession of Giant Siamese Carp. Brendan captured six individual specimens with weights ranging between 20 and 30 kg’s in addition to Redtail Catfish to 30 kg’s, Silver Carp and various Featherback and other predatory species on small livebaits and freshwater shrimp hookbaits.
On the final days fishing Brendan captured a small Common Carp of 14lb’s on a string of hair rigged peanuts presented over a bed of maize. 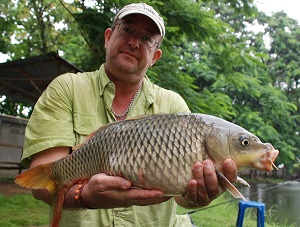