Bangkok resident and specimen hunter Brendan joined Boy at Bungsamran Lake in Bangkok in search of Giant Siamese Carp.
Fishing a prebaited marginal area on the public bank Brendan caught several specimen sized Striped Catfish to an estimated 20kg’s. After a quiet spell Brendans buoyant hookbait was finally taken by his intended species.
With the Giant Siamese Carp charging into the nearby structure the angler was forced to release the bail arm on his reel as Boy carefully entered the water retracing the fish’s path through the snags.
After having to cut and retie the line on several occasions Brendan finally regained contact with the massive Carp. With the carp now in open water the angler was able to bring the monster carp into netting range where Boy managed to net the beast on his first attempt. The Giant Siamese Carp had a massive girth and a length of well over 1.5m’s and was estimated to weigh a whopping 63kg’s. 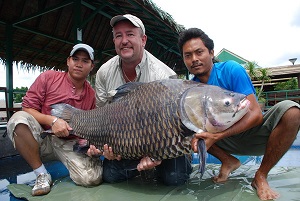