UK angler Steve a returning client decided to try a spot of carp fishing Thailand Bangkok during his  holiday.

On arrival at the Bungsamran Fishing Park in Bangkok the English angler was soon fishing two large balls of local groundbait which had been packed onto feeders in a quiet marginal area close to the wooden supports of a fishing platform.

Baiting on a little and often basis the angler slowly added bait to the marginal spot every ten to fifteen minutes.

Several small Striped Catfish were quickly landed and released back into the lake further up the fishing platform so as not to disturb the baited area.

Steve waited patiently for the carp to arrive and was soon observing bubbles breaking the surface over the baited area at regular intervals.

With plumes of bubbles constantly breaking the surface things looked particularly good for a take and it was not long before a high speed take saw line being stripped from the reels and the angler scrambling into action as he lifted into the rapidly departing Giant Siamese Carp.

With a large bow wave exiting the baited area and a mass of bubbles it was clear that Steve had indeed hooked his target species.

The Giant Siamese Carp rapidly headed towards the centre of the lake causing large bow waves and swirls thiry yards out into the lake.

Applying as much pressure as he dared the angler bent the fishing rod into the carp slowing the carp’s unstoppable run to a crawl.

The constant pressure started to take its toll on the Giant Siamese Carp and saw the carp turn sharply and make a determined effort to get under the fishing platform.
Steve immediately put the fishing rod into its full test curve literally hauling the carp out of the danger area.

This process was completed several more times in the following minutes as the carp continually tried to enter the snags under the fishing platform.

Finally after almost twenty minutes the carp rolled a few yards from the fishing platform and was quickly scooped up in the landing net by the guide.

The Giant Siamese Carp was quickly hoisted onto the unhooking mate where it was estimated to weigh in the excess of 40kg’s.

The captor proudly held the Giant Siamese Carp aloft for the cameras before releasing the carp back into the fishing lake.

Steve continued fishing for the rest of the day but failed to catch any further carp. The angler however did go on to land several further Mekong Catfish with weights between 15-30kg’s. 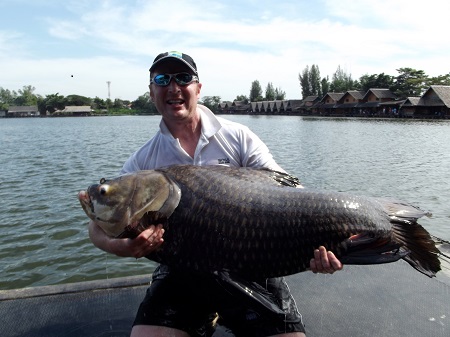