Carp fishing in Thailand at Bungsamran

International specimen hunter Francois Pineau from French Guyana returned to Bungsamran Lake on a carp fishing session after an absence of almost two years.
The seasoned big fish man decided to start his fishing holiday in search of Giant Siamese Carp in Bangkok.
After an early start the angler began to fish on the public bank with large method balls of locally produced groundbait moulded onto large cage feeders.
Gently lobbing the feeders to nearby marginal areas the angler waited for further developments to unfold.
Several Striped Catfish soon fell for the angler’s method tactics with weights of 6-7.5kg’s.
The angler continued to top up the swim with groundbait after each fish keeping the swim well fed in eagerness of the arrival of the carp.
Without warning one of the rods fished in the nearby margins tore off as a large Giant Siamese Carp charged away with the bait.
With line being violently ripped from the tightened spool of the reel Francois immediately applied side strain in an effort to stop the carps powerful run and the fish.
A twenty minute battle followed which saw the Giant Siamese Carp turning sharply in an effort to gain the sanctuary of the nearby snags.
The angler expertly guided the carp from the danger zone where it proceeded to plough up and down the margins angrily.
After several more fraught moments at the time of netting the carp was finally netted and hoisted onto the unhooking mat.
The large Giant Siamese Carp was estimated to weigh 40kg’s+ and was proudly displayed for the cameras before being released.
The days angling progressed on much the same lines seeing the angler catching a succession of hungry Striped and Mekong Catfish with weights to an estimated 30kg’s. 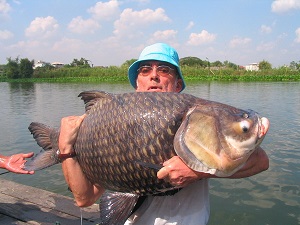