Matt, Ashley and Stephen from the UK chose to spend the first day of their fishing holiday carp fishing at Bungsamran Lake in Bangkok.
The UK carp fishing enthusiasts arrived early in the morning before quietly setting up on the public bank.
After packing large amounts of locally produced and flavoured groundbait onto the large cage feeder, the anglers gently lobbed their rigs to a marginal area close to the underwater structure of the nearby fishing platform.
Only fifteen minutes later one of the rods ripped off as an unseen Giant Siamese Carp steadily moved away with the bait removing yard upon yard of line from the reel.
After setting the hook firmly Matt wound down hard into the fish altering the fish’s course thirty yards out into the lake.
The carp responded by making a powerful and determined run along the length of the fishing platform causing the angler to follow the fish along the platform to remain in direct contact with the Giant Carp.
Several more high speed runs saw the Giant Siamese Carp heading for the centre of the lake once again causing the angler to pile on more and more pressure in an attempt to stop the fish’s departure.
After a further five more minutes the Giant Carp was finally within netting range where it wallowed on the surface almost waiting for the net.
The net was duly pushed under the Giant Siamese Carp scooping the fish into the mesh and causing the fish to violently thrash the water to a foam in one last desperate attempt for freedom.
The Giant Siamese Carp was hoisted onto the unhooking mat where it was observed to weigh around 15kg’s.
Matt proudly displayed the carp for trophy shots before it was quickly slipped back into the lake.
The days fishing continued with all of the UK anglers catching a succession of monster Mekong Catfish with each of the anglers landing hard fighting specimens to around the 30kg region.
At the end of the days fishing the anglers had accounted for a large haul of Mekong and Striped Catfish topped by a beautifully conditioned Giant Siamese Carp of over thirty pounds. 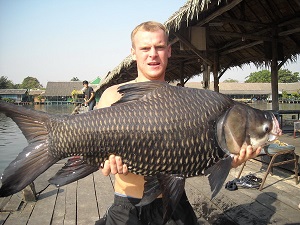