Indian angler Mohamed visited Thailand for a three day Bangkok fishing tour carp fishing at Bungsamran fishing park.
After fishing for the first day and only catching a large haul of Mekong and Striped Catfish the angler returned for the second day in search of Giant siamese Carp.
Fishing from a private bungalow the Indian angler baited heavily in the margins near the supports of the bungalow with lam and waited for events to unfold.
Several Catfish soon homed in on his baited area and were duly landed before the swim suddenly went quiet.
Large plumes of bubbles began to break the surface as a large fish clearly grazed over the baited area.
Moments later the fishing rod burst into life as a violent run dragged yards of line off the reel.
Winding down into the unseen fish saw a large bow wave move out into the lake as a large carp exited the swim.
A fifteen minute battle followed which saw the angler fighting the unseen carp as it ploughed around out in the lakes centre. Several powerful runs saw the fish getting dangerously close to the stilted bungalows causing the angler to apply maximum pressure to steer the fish out of the danger area.
After several fraught moments at netting the Giant Siamese Carp was finally brought up onto the mat to reveal a stunning specimen estimated to weigh 30-35kgs.
After a few quick pictures the Giant siamese Carp was released back into the lake.
The following day saw the angler once again fishing in the same area.
On this occasion the angler once again waded through dozens of catfish for the majority of the day before finally hooking his intended target fish.
The Giant siamese carp on this occasion was estimated to weigh slightly less than the fish caught the previous day and was estimated to weigh 25kgs.
After fishing in Bangkok for three days the Indian angler had landed literally dozens of mekong Catfish to 45kgs in addition to Striped Catfish to 12kgs and a beautiful pair of Giant Siamese Carp topped by a 35kg monster! 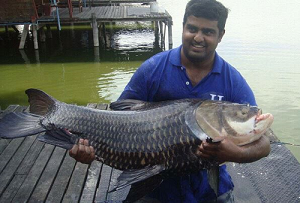