UK angler Stephen visited the highly prolific Palm Tree Lagoon in Thailand fishing for Arapaima and other freshwater monster fish.
On arrival at Palm Tree Lagoon the angler commenced fishing with one rod for the many predators and one rod for carp fishing. This was real carp fishing Thailand.
Fishing with large Java Barb deadbaits the angler cast to a quiet marginal area and baited lightly with chopped fish.
The anglers other carp fishing rod was cast slightly further out towards showing fish and heavily baited with groundbait.
Stephen did not have long to wait before the rod fished for carp in the margins burst into life as line began to be stripped from the spool of the reel.
Winding down into the unseen carp saw a large swirl appear over the baited area which was followed by several heart stopping moments as the Giant Siamese Carp charged off towards the centre of the lake.
After a short but highly spirited battle the large Giant Siamese Carp was finally guided into the waiting landing net and hoisted onto terra firma.
The Giant Siamese Carp was found to be in immaculate condition and was estimated to weigh at least 30 kg’s.
Stephen captured several more Rohu (Indian Carp) in the convening hour or so from the heavily baited marginal swim with relatively low weights reaching 12lb’s.
Stephen’s other predator rod did not remain quiet for long with several Redtail Catfish picking up his livebaits and powering off around the lake.
After landing a few smaller Redtail Catfish to 15kg’s the predator rod once again ripped off but this time connected to a much larger stamp of predator.
Winding down hard into the unseen predator saw the unseen monster fish respond with a deep unstoppable run which saw the fish tightly hugging the bottom.
Continued pressure and patience soon started to take its toll on the predator and saw the unseen fish finally reveal itself several yards out in the lake. With a large Red tail breaking through the surface it was immediately clear that the angler had hooked a large Redtail Catfish as it powered off towards the bottom on one last run.
Fifteen minutes after hooking the monster Redtail Catfish the catfish was finally netted and hoisted onto the bank.
The monster Redtail Catfish was estimated to weigh 35kg’s+ and was proudly displayed by the captor before being released back into the lake.
Stephen’s day fishing at Palm Tree Lagoon continued to progress well and continued in much the same pattern.
At the end of the anglers highly productive days carp fishing Thailand Stephen had landed 5 Redtail Catfish to 35kg’s, 3 Giant Siamese Carp from 25-30kg’s, 2 Featherback’s caught on worms, 12 Rohu to 12lb’s and a bonus Alligator Gar. 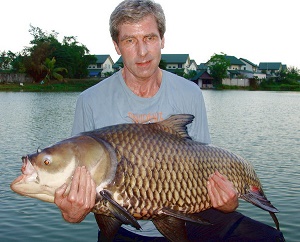