Fishing to a regularily baited marginal area with bottom bait tactics soon resulted in a small Striped Catfish which had taken a liking to the heavily scented groundbait.

After a quiet spell which saw large swirls appearing above the baited area a high speed take saw line evaporating from the open spool of the reel.

Clamping down onto the spool of the reel saw the powerful run stopped and the unseen fish turning sharply towards the underwater snags.

Applying as much pressure as humanly possible saw the unseen fish once again turned away from the danger area and moving quickly out into open water.

Whilst out in open water the fish embarked on another high speed run towards nearby structure requiring the angler to apply maximum side strain to once again turn the fish away from the snags.

Large vortices broke the surface of the water as a large Giant Siamese Carp boiled just below the surface several yards from the fishing platform.

David carefully guided the Giant Siamese Carp towards the net where it was netted on the first attempt by Boy. 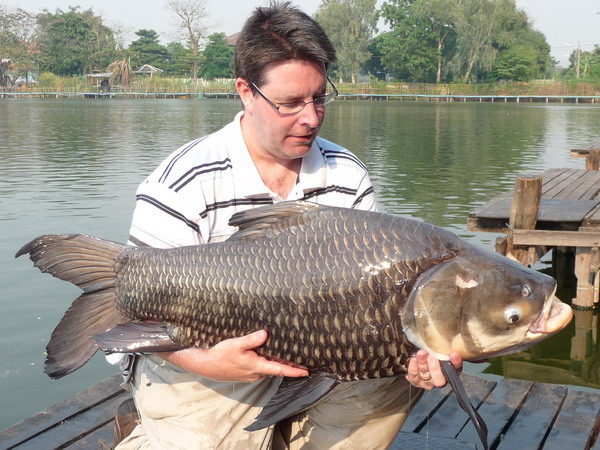