Catfish fishing at Bungsamran in Bangkok

Expat angler’s Andy and Brett visited the famous Bungsamran Lake in Bangkok in search of monster Catfish.
On arrival the anglers chose to fish from a private bungalow using sliding float set-ups loaded with local groundbait. Super sharp Owner hooks were lightly pressed into the bait balls and cast towards the centre of the lake.

After a matter of just seconds the float slowly was pulled under the surface as a Mekong Catfish proceeded to head off with the bait.
Quickly winding into the fish saw the rod bent into full fighting curve as the Mekong Catfish made a series of unstoppable runs!
Twenty minutes later the catfish was finally netted and hoisted up onto the unhooking mat.
The Mekong Catfish was estimated to weigh 25kg’s and was released after a short photo session.

Next up was Brett who was soon attached to another powerful fish which once again proceeded to charge off towards the centre of the lake.
Another fifteen minute battle followed which saw the fish trying to enter the nearby submerged snags on the right of the swim.
After skillfully guiding the catfish from the danger area the fish was soon brought over the net and once again placed on the unhooking mat.
The Mekong Catfish on this occasion being a slightly smaller specimen of an estimated 18kg’s.

Andy was into another fish shortly after which was netted after a short and uneventful battle and was identified as a Striped Catfish of an estimated 12kg’s. 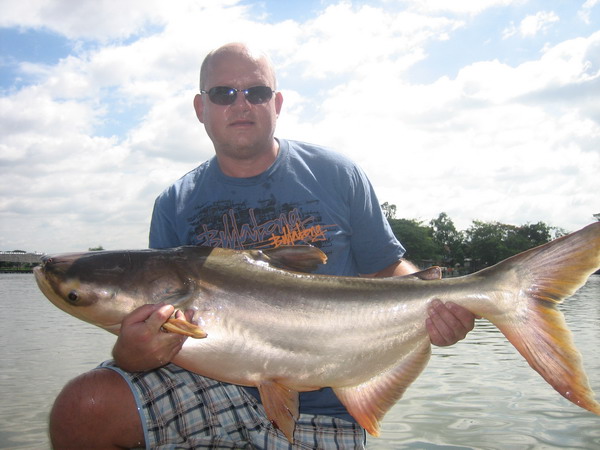