Calvin Tan, Mick and Mooky returned for the second day of a two day fishing trip to IT Monster Predator Lake in Ratchaburi.
Once again the predators were on the feed with all of the anglers catching double figure hauls of various predatory fish.
The anglers accounted for Asian Redtail catfish, Arapaima, Redtail catfish and Giant Snakehead in what could be described as a mixed bag.
The largest fish of the day was estimated to weigh 30kg+ being a Redtail caught by Calvin Tan on a highly productive days predator fishing at IT lake 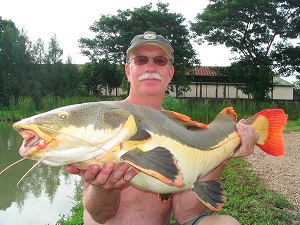