After fishing on the Ban Pakong River the previous day and not receiving any action the Fishsiam team once again visited the Ban Pakong River in Chachoengsao province.
The river system carried a great deal of floating vegetation on the previous day and had caused various problems whilst fishing baits at midstream.
Today the river seemed much clearer and the possibility of a fish seemed much better.
The team adopted a roving approach and fished several different areas of the river from a boat.
Rowing baits out into midstream whilst the boat was anchored at various marks on the river saw six rods soon placed at various parts of the river.
Regular checking of the baits revealed that fish were indeed in the area with two of the baits being mauled without giving any indication.
Big rafts of floating debris coming down the river caused the team to regularly change the boats location in an attempt to avoid the underwater obstructions.
A frustrating few hours saw the baits regularly being taken, but due to large bows in the line caused by the flotsam and underwater debris no indication was received on the rods.
The team fished well into the evening in an attempt to catch a Giant freshwater stingray.
After several more hours a tentative take on one of the livebaits indicated that a stingray had picked up one of the baits.
A short ten minute battle ensued which was to result in a small stingray of possibly 10kg’s being netted at the bankside.
On inspection the stingray was found to not be a Giant freshwater stingray but a rarely seen Cow Tail Stingray.
The fish was estimated to weigh 10kg’s and was identified as being a male.
After a short examination by Dr.Hogan the Cow Tail Stingray was released back to the Bang Pakong river. 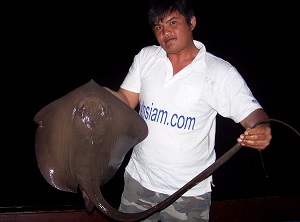