European angler Tomasso started his Thailand holiday fishing at IT Lake Monsters for Dog Eating Catfish and other predators.
On arrival at IT Lake Monsters the angler was soon casting lures at the various predators showing out in the pond.
It wasnt long before the angler opened his account with a small Alligator Gar.
Further Gar and Pacu were landed in the following hours in addition to a few Sorubim.
On changing over to deadbait in the afternoon the angler added some nice Redtail Catfish to 25kg’s to his tally of monster fish.
As the days fishing continued the Redtail Catfish continued to grace the anglers net with several specimens landed over 30kg’s.
A change over to live bait fished under a bung was soon implemented and it did not take long before the float was away and line was being pulled from the reel.
On winding down into the unseen predator a large swirl was seen out in the lake revealing a long elongated dorsal fin.
The Dog Eating Catfish or Chaophraya Catfish put up a good battle for the next fifteen minutes before it was brought into netting range.
On netting the catfish it was observed to be an extremely long and broad fish which only fitted half of its body into the net.
The Dog Eating Catfish was estimated to weigh in the region of 45-50kg’s and was released after a few trophy shots.
Tomasso continued fishing with live bait until the end of the days fishing and landed several more Chaophraya Catfish with weights ranging between 25-35kg’s 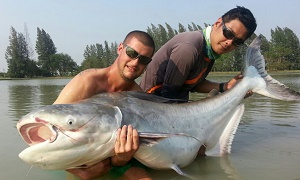