After an early start the husband and wife duo began fishing early with one rod baited with mackerel in addition to a carp outfit.
The morning passed relatively quietly with only a small Giant Siamese Carp falling to the carp rod of an estimated 20kg.

As the afternoon wore on a hesitant take on the rod fished with mackerel saw the anglers connected to a lively predator which powered off into the lake.
The predator stayed deep and did not show during the early stages of the battle hugging the bottom tightly.

As pressure was piled onto the unseen predator it changed direction heading back towards the anglers.
The ugly head of a Goonch Catfish suddenly popped out of the water firmly clamped onto the mackerel section.

The Goonch was estimated to weigh 5kg’s.

The anglers continued to fish into the afternoon but received very little interest in their baits.

Later in the afternoon a high speed take just before fishing ended saw the carp rod away on a flyer.
The culprit on this occasion was beaten after a short battle and was identified as being a Yellow Cheeked Carp of an estimated 8kg. 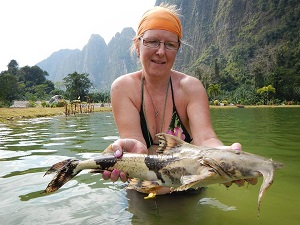