Visiting Lure fisherman Stephen Heng and a friend visited the highly prolific Barramundi Ponds just outside Bangkok on a Barramundi fishing trip.
Guided by Boy the anglers adopted a roving approach and fished at several of the numerous ponds located on the complex.
Expertly casting their lures into the ponds the anglers top water lures were aggressively hit by savage bites throughout the day.
After catching over a dozen fish from the first pond with weights around the 4kg region the anglers moved location to a neighboring pond and once again cast their Rapala lures.
After several dropped fish Stephen managed to hook up with a much larger specimen of 6.5kg’s which acrobatically jumped from the lake in an effort to shake out the lure.
Several other fish followed of similar weights with both Stephen and his friend both accounting for Barramundi over 6kg’s.
Yet another move saw the anglers once again amongst the fish with a succession of smaller 4-5kg’s specimens falling to their carefully presented lures.
After fishing for six hours in sweltering temperatures the anglers had finally amassed a gigantic fifty plus fish haul with specimens of 4-7kg’s.
The anglers used various poppers and Rapala top water lures throughout the highly productive days angling and regularly changed their presentations in order to keep one step ahead of the fish. 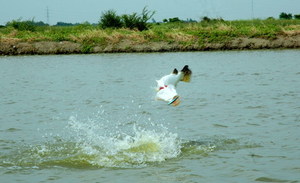