UK angler Dave spent his second day fishing at Palm Tree Lagoon in search of giant fish.
After landing a large haul of carp and catfish species on the previous day the UK angler once again fished a combination of deadbaits and carp tactics.
Dave was soon into fish and caught several Redtail Catfish to an estimated 25kg’s during the first part of the morning.
Several carp species also fell for the angler’s carp fishing tactics with specimen sized Rohu and a strange hybrid Catla/Giant Siamese Carp of an estimated 18kg’s.
The UK angler fished well and caught throughout the day with a reasonable sized Sharptooth Catfish also making an appearance in the later part of the days fishing.
As the day wore on the angler added further fish to his tally with more Redtail Catfish being landed.
With the days angling coming to an end there was time for one last run which came in the form of a high speed take on the predator rod.
On winding down into the unseen predatory fish the rod was dragged over as line was pulled from the tightened spool of the reel.
A short but highly charged battle followed which saw the fish charging about in open water before it was finally landed and hoisted onto the bankside.
An extremely large Alligator Gar was quickly unhooked with pliers before Dave proudly held the predator aloft for the camera.
The Alligator Gar was over two metres long and was estimated to weigh in the region of a monstrous 25kg’s.
The giant Alligator Gar was also extremely broad across its back and was certainly the biggest example of the species that we have witnessed in Thailand. 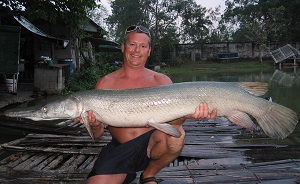