David and Alison from the UK continued their Thailand fishing holiday with a visit to Amazon BKK1 predator lake located just outside of Bangkok.
On their arrival at the new predator fishing lake David and Alison cast out floating deadbait rigs to fish regularly showing out in the centre of the lake.
The anglers patiently watched the floats as several sizeable predatory fish continually showed in the vicinity of the baits.
After several aborted takes one of the floats burst into life and was dragged across the surface.
On winding down into the fish and setting the hook the fish immediately cleared the water angrily shaking its head to rid itself of the hook.
The Arapaima charged off across the lake on a tight line before once again becoming airborne.
After a dogged ten minute battle the Arapaima was finally netted and brought to the bankside for photography.
The Arapaima was estimated to weigh 30kg’s and was proudly held up for photographs by Alison before being slipped back into the lake.
With the disturbance of the Arapaima capture the lake suddenly switched off and the fish seemed to become wary and uninterested in the anglers baits.
A change over to livebait’s on both rods soon produced a take with David soon banking a good sized Sorubim of an estimated 30lb’s.
The UK anglers fished throughout the afternoon and both caught further modest sized Arapaima or Pirarucu to 25kg’s in addition to several other exotic monster fish species.
By changing their tactics between live and deadbaits the anglers continued to stay in contact with the predators and banked an impressive twelve fish during the day’s highly productive predator fishing session. 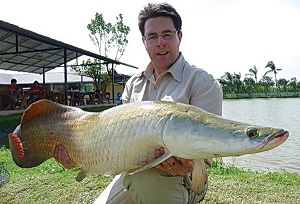