Fishing for Arapaima IT Lake Monsters

Jason and Jackie continued their fishing holiday in Thailand with a predator fishing trip to IT Lake Monsters in Ratchaburi.
On arrival at the lake the anglers began to fish with artificial lures and moved slowly round the lake casting at the multitude of showing fish.
After several exploratory casts Jackie soon hooked into a fish which charged off across the lake.
After a short but spirited fight the first fish of the day was brought to the waiting landing net and hoisted onto the bank.
The small Alligator Gar was quickly photographed before being released back into the lake.
Further casts saw the anglers both latching into more predators with Pacu, more Alligator Gars and a few Redtail Catfish to an estimated 15kg’s.
Arapaima constantly rolled out in the lake but seemed impervious to the anglers lures.
After changing over to deadbaits at 2pm the anglers started to get amongst the larger fish with both Jason and Jackie both landing some good sized Redtail Catfish to over 23kg’s.
Several good sized Sorubim were also landed to almost 20kg’s in the latter part of the day in addition to further Alligator Gar and Sharptooth Catfish to 17lb’s.
At the end of their days predator fishing at IT Lake Monsters the anglers had amassed a large mixed haul of predators with over twenty different fish topped by some large Redtail Catfish to an estimated 25kg’s.
Unfortunately the Arapaima failed to make an appearance on this fishing trip but the anglers were rewarded by lots of other predators. 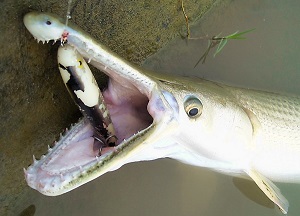