Rutger from Sweden continued his Thailand fishing holiday with a visit to Palm Tree Lagoon in Ratchaburi.
On arrival at the lake Rutger began fishing with one rod for the predators and one for the various monster carp species.
Rutger fished his carp rod over a large bed of cereal groundbait with a big method feeder packed with similar bait.
The predator rod was fished in a roving manner with a large freelined barb being cast to showing Arapaima and other predators on a regular basis.
Rutger also prebaited several marginal areas with deadbait in an effort to draw in the predators.
It was not long before the Swede was into his first fish which was quickly landed on the carp set up.
After a few quick photos a lively Rohu (Indian carp) was released back into the lake and the rod was recast back onto the baited area.
Shortly after the carp rod burst into life as yet another monster carp species rapidly exited the baited swim.
Rutger wound down into the unseen carp causing the carp to change direction and charge off along the nearside margin.
After a spirited ten minute battle a rarely seen Catla Catla surfaced just out of netting range, slowly but surely the Swedish angler pulled the fish towards the net until it was safely netted by the guide.
The Catla Catla was estimated to weigh 22 kg’s and was released after a few trophy shots with the camera.
Once all of the commotion had subsided the predator rod suddenly lurched into action as a determined run saw several yards of line pulled from the spool.
The rod was soon bent double as it became clear that Rutger had hooked one of the lakes Giant freshwater stingrays.
A twenty minute battle ensued which saw the freshwater stingray clamping onto the bottom on several occasions causing the angler to prise it from the lakebed.
After getting the freshwater stingray off the bottom for one final tome the angler rapidly replaced line on the spool of the reel keeping a tight line on the Giant freshwater stingray.
Moments later the guide entered the water bravely grasping the mouth of the stingray and hauling it onto the fishing platform.
The Giant freshwater stingray was estimated to weigh 50kg and was released shortly after photography.
Rutger continued fishing through the afternoon landing several more Rohu between 3-5kg’s.
With large Arapaima surfacing close to one of the baited spots the angler waited patiently for the predator rod to go off.
Suddenly a high speed and powerful take signaled the arrival of a predator as line began to be dragged from the spool of the reel.
Very early in the fight it was clear that the culprit was not an Arapaima and was most likely a Redtail Catfish as the fish bored deeply and powerfully out into the lake.
Fifteen minutes later a large red tail confirmed the angler’s suspicions as it broke through the water several yards out into the lake.
After a few fraught moments at netting the large Redtail Catfish was carefully hauled onto the fishing platform.
The Redtail Catfish was estimated to weigh between 25-30kg’s and was released after photography.
Later in the afternoon Rutger followed up with another Redtail Catfish of a slightly smaller size before the predator rod fell silent once again.
At the end of the days predator fishing at Palm Tree Lagoon Rutger had amassed a double figure capture with several species of carp topped by a beautiful Catla Catla of 22kg’s in addition to a Giant freshwater stingray estimated to weigh 50kg’s and two stunning Redtail Catfish to 25-30kg’s 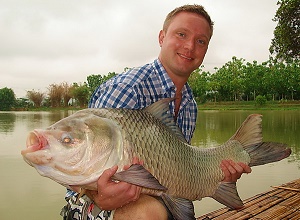