Fishing for Arapaima in Thailand at IT Lake

Home Catch Reports Fishing for Arapaima in Thailand at IT Lake

UK angler Mike Bolt visited IT Lake Monsters in Ratchaburi in search of predatory monster fish.
Fishing alongside a companion the angler was quickly connected to a predator after making a few quick casts.
Continually casting a variety of Rapala and Owner lures to showing fish soon saw the UK angler banking a series of big fish.
Mike caught several large Redtail Catfish to just under 20kg’s throughout the morning in addition to a bonus Giant Snakehead.
Mikes companion also caught various predatory species throughout the morning with Sharp toothed Catfish and Redtail Catfish all making an appearance.
After changing over to baits at 2pm the anglers didn’t have long to wait before the predators moved in on their mackerel deadbaits.
Both Mike and his friend caught consistently throughout the day with a series of large Redtail Catfish falling to their deadbait approach.
Both anglers accounted for big Redtail Catfish to almost 30kg’s in addition to various other predatory species such as Sharp toothed Catfish, Giant Snakeheads and Striped and Spotted Sorubim.
At the end of the days Arapaima fishing in Thailand the angler’s had amassed a large thirty eight fish capture topped by some quality Redtail Catfish of almost 70lb’s. 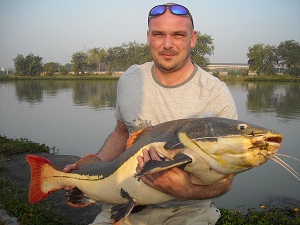