After an early start the angler was soon boarding a boat and traveling upriver to a previously productive stingray fishing area.
With the coming of the high tide a slow but determined take indicated the beginning of a grueling thirty minute battle.
The UK angler expertly played the unseen Giant freshwater Stingray as it powerfully moved off into the main flow of the river.
After playing the stingray for several minutes the stingray went firmly to ground on the muddy bottom creating an unmovable force on the riverbed.
Continued pressure on the freshwater stingray eventually shifted the stingray causing it to embark on another powerful run.
After embedding itself into the bottom on several other occasions the stingray was finally brought up off the bottom where it was fought out in the upper layers of the river.
The heavy duty stand up outfit creaked under the strain if the unseen stingray as the fish was winched towards the surface inch by inch.
Finally the stingray broke through the surface revealing a large freshwater stingray of an estimated 100kg’s.
After securing the stingray alongside the boat the stingray was brought to shallower water where trophy shots were quickly snapped off.
After releasing the stingray the anglers fished on for several hours receiving several other bites but unfortunately did not manage to land any further stingrays. 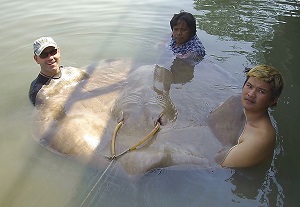