International specimen hunter Francois Pineau returned once again for a fishing session to Bungsamran Lake in Bangkok.
Fishing from the public area the angler began fishing with battered fishballs in an attempt to catch one of the numerous Chaophraya Catfish which regularly surface out in the centre of the lake.
After assembling a sliding float the angler attached the fishballs to a sharp Owner hook and cast out towards showing Chaophraya Catfish.
It was not long before the float came to life and was slowly dragged under the surface.
Winding down into the fish and firmly setting the hook in its bony mouth instantly resulted in the rod being almost wrenched from the anglers grasp as a large Chaophraya Catfish powered off with the bait.
The ensuing battle lasted several minutes and saw the Chaophraya Catfish making a series of deep lunges in an attempt to evade capture.
After a further few minutes the Chaophraya Catfish was finally brought into netting range where it was quickly scooped up in the net.
After hoisting the Catfish onto the unhooking mat the Chaophraya Catfish was estimated to weigh a pleasing 22kg’s and was released shortly after photography.
The angler continued to catch Chaophraya Catfish on a regular basis until just before midday when sport slowed down due to the searing temperatures.
A change over to a sliding float set-up in order to target the Mekong and Striped Catfish soon saw the angler catching again with several Mekong Catfish and Striped Catfish immediately taking a liking for the bait.
In the course of the next few hours the angler caught a succession of big Mekong Catfish topped by a monster 50kg+ specimen.
In the evening the angler received more action from the hungry Chaophraya Catfish taking specimens with weights of 16, 18 and 25kg’s.
At the end of the days highly prolific day fishing at Bungsamran Lake, Francois had amassed a large double figure haul of monster fish consisting of Mekong Catfish to 50kg+ and Chaophraya Catfish to a satisfying 25kg’s+. 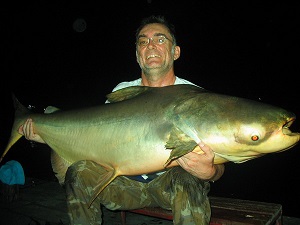