On arrival at Bungsamran Lake with is father , Lee wasted no time in casting out a sliding float set up towards the hordes of showing Catfish. The anglers did not have long to wait before one of the rods burst into life as an unseen monster catfish powered off with the bait. Winding down into the Mekong Catfish caused the rod to arch over as the fish powered off towards the far side of the lake. Lee battled the fish for several minutes before bringing it into netting range where it was scooped up by the guide.

The Mekong Catfish only weighing 15kg’s had served as a good example of what was in store for the rest of the days fishing at Bungsamran Lake.

Next up was Lees father who was soon attached to another beast of a catfish which once again proceeded to rip yard upon yard of line from the spool.
Yet again the Mekong Catfish was played back from long distance before being netted several minutes later.

The days Mekong Catfish fishing progressed in a similar pattern with both anglers battling a succession of hard fighting Mekong Catfish with weights between 10-25kg’s.

As the days fishing continued both anglers landed several slightly larger specimens around the 30kg region which severely tested the tackle and the anglers stamina.

At the conclusion of the days angling the father and son fishing duo had succeeded in landing a large double figure haul of Mekong Catfish with several specimens reaching 30kg’s+. 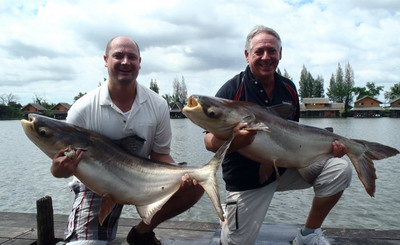