Fishing in Bangkok for Mekong Catfish

Dale from the UK travelled back to Bangkok fishing at Bungsamran Lake for Mekong Catfish and other monster fish.
On arrival at the lake the angler started fishing on the public bank and quickly cast out rods towards showing fish in the centre of the lake.
It was only a matter of minutes before the sliding float disappeared under the water as an unseen catfish moved powerfully away with the bait.
Winding down into the fish saw the rod tip pulled over as the fish charged towards the distant bank.
Continued pressure soon took its toll on the fish and after a short ten minute battle a small Mekong Catfish was brought into the landing net.
The Mekong Catfish which was estimated to weigh 15kg’s was quickly photographed before being released.
Several minutes later another high speed run saw the angler once again bent into another monster catfish.
The fish on this occasion was beaten after another short battle and was observed to be of a similar size.
A change of rig to bottom fishing tactics soon saw the angler fishing a few yards from the fishing platform in an attempt to catch one of the many monster sized carp which reside in the lake.
The angler topped up the swim at regular intervals with groundbait to entice the carp and catfish to feed.
After a quiet spell one of the margin rods burst into life as another monster fish moved off with the bait.
Winding down into the fish saw a large bow wave over the baited area as a large Mekong Catfish charged out towards the centre of the lake.
A fifteen minute battle ensued which saw the powerful fish testing the angler to his limits as it embarked on a series of unstoppable runs.
The Mekong Catfish was finally brought to the net after a few fraught moments at netting and was hoisted onto the unhooking mat.
The large Mekong Catfish was estimated to weigh 30kg’s and was quickly photographed before being released.
Dale fished for the rest of the day catching a succession of Mekong Catfish and Striped Catfish.
At the end of the days angling Dale had amassed a double figure haul topped by a monster Mekong Catfish of 30kg’s. 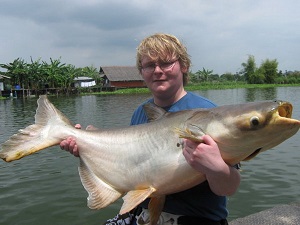