After spending a two week holiday in Thailand Michael and Sofi from Sweden decided to spend a day fishing for Mekong Catfish at Bungsamran Lake in Bangkok.
On arrival at Bungsamran Lake the anglers chose to fish from the public bank and were soon casting out sliding float set ups towards the centre of the lake and the hordes of showing Mekong Catfish.
With the floats hardly having time to settle one of the floats was violently pulled under the surface as the first Mekong Catfish of the day powered off with the bait.
Michael wound down into the unseen Mekong Catfish causing a massive bow wave out in the centre of the lake as the Mekong Catfish charged off towards the horizon.
Continued pressure finally slowed the Mekong Catfish’s powerful run allowing the angler to turn the fish and begin to pump it back towards him.
Several further bursts of power caused the angler to take his time with the Mekong Catfish and saw it finally netted after an arm aching battle.
The Mekong Catfish was estimated to weigh 30 kg’s and was proudly displayed for the cameras before being carefully returned.
Sofi was next up and was soon connected to a hard fighting Mekong Catfish which also gave an extremely good account of its self, testing the female anglers strength to its limit.
The days fishing Bangkok at Bungsamran Lake progressed in much the same fashion seeing both angler’s landing a succession of hard fighting Mekong Catfish and Striped Catfish.
After a short break for lunch the anglers having recharged their batteries were ready to commence battle once again.
Several larger sized Mekong Catfish were landed as the days fishing continued with both anglers landing fish approaching 35kg.
At the end of the days highly productive fishing session the pair of Swedish anglers had succeeded in landing a massive twenty two fish haul with several Mekong Catfish weighing upto 35 kg’s 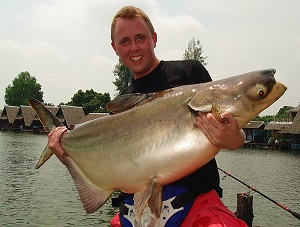