Visiting anglers Cliff and Jamie visited the Barramundi fishing ponds just outside Bangkok.
On arrival the anglers used medium weight spinning outfits with light weight Shimano reels loaded with 30lb braided mainlines fished with a selection of Cultiva and Rappala lures.
The anglers adopted a roving approach and regularily moved from pond to pond in an attempt to keep in touch with the fish.
Carefully fishing a variety of lures at different rates of retrieval resulted in extremely aggressive and hard hitting takes from the hard fighting and highly acrobatic Barramundi.
Both Clifford and Jamie both bagged up in style with the anglers both catching a procession of hard fighting sport fish to 6kg’s throughout their six hour session.
Carefully changing the lure presentations saw the anglers constantly in touch with the fish with the lures barely hitting the surface on some occasions before being savagely attacked.
The action was non stop throughout the days fishing session with the anglers successfully landing over twenty fish each over the course of the day.
Both anglers also lost possibly ten to fifteen fish during the day due to the highly aggressive Barramundi shaking themselves free of the angler’s lures. 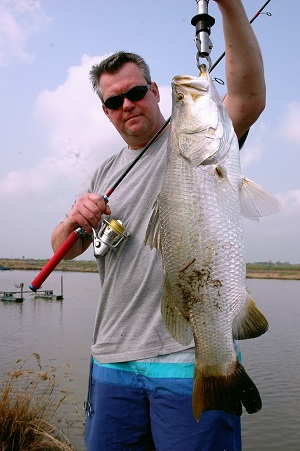