Day three of Dales fishing at Bungsamran Lake saw the angler once again fishing on the public area.
After catching a Giant Siamese Carp on the previous day the angler once again fished to a quiet marginal area which had been prebaited.
The morning passed relatively quickly and saw the angler catching a succession of small Mekong Catfish and Striped Catfish.
Later in the afternoon the angler switched tactics to a sliding float approach and used fishballs purchased from a nearby food stall as bait.
With several large Chaophraya Catfish surfacing at regular intervals out in the centre of the lake the angler waited patiently for a take.
After almost forty minutes the anglers patience was finally rewarded as the float rapidly disappeared under the water.
Winding down into the fish to set the hook saw a large bow wave out in the lake as a Chaophraya Catfish felt the hook.
The Chaophraya Catfish responded by embarking a powerful run which stripped yards of line off of the tightened reel.
A fifteen minute battle followed which saw the fish fighting the majority of the battle on the surface.
After a few deep diving runs the Chaophraya Catfish was finally beaten and carefully steered towards the waiting net.
On hoisting the Chaophraya Catfish onto the bank the fish was estimated to weigh 20kg’s and was photographed before release. 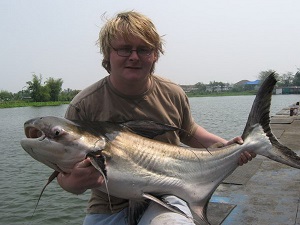