The second day of their Thailand fishing holiday saw Jimmy and Amanda once again fishing at Bungsamran Lake in Bangkok.
After landing lots of Mekong Catfish the previous day Jimmy decided to change tactics and fish for the Giant Siamese Carp.
Jimmy fished two rods in the nearby margin close to the supports of the fishing platform with large balls of groundbait on the bottom.
It was not long before Jimmy landed the first fish of the day in the shape of a small Striped Catfish.
Several more Striped Catfish followed in the next hour before the swim fell quiet.
Large plumes of bubbles soon began to surface over the baited area and a high speed take soon followed.
Jimmy was in no doubt as to what fish he had hooked as a large bow wave exited the swim.
The Giant Siamese Carp embarked on an unstoppable run towards the centre of the lake removing yards of line from the reel in the process.
Jimmy managed to regain some line onto the reel as the carp changed direction and rapidly headed for the snags under the fishing platform.
Once again Jimmy managed to regain some control and the carp powered back off into the lake.
A twenty minute battle followed which saw the carp making a series of powerful runs.
Finally the carp surfaced and was quickly netted by the guide.
The Giant Siamese Carp was estimated to weigh 40-45kg’s and was proudly displayed by the captor.
Jimmy continued Fishing for Carp Bangkok for the rest if the day and failed to land any further carp.
At the end of the days fishing in Bangkok the angler had amassed a fifteen fish capture topped by a stunning Giant Siamese Carp. 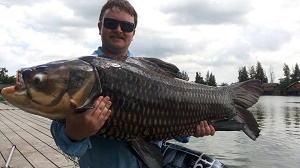