Day two at fishing at Bungsamran Lake in Bangkok saw Mark from the UK once again fishing from the public bank.
Another early start on the public bank saw the UK angler fishing with sliding bungs out in the centre of the lake.
Mark fished with heavily flavoured local groundbait moulded onto inline method feeders suspended at variable depths beneath a sliding float arrangement.
Short braided hooklinks attached to super sharp Owner hooks completed the set up’s which were hurled towards showing fish in the central part of the lake.
After only a matter of minutes one of the floats lurched into life as it began to be towed across the surface.
Quickly winding down into the unseen catfish saw the fish respond by accelerating even faster towards the far side of the lake.
A protracted and drawn out battle followed which saw the angler fighting the unseen Catfish as it powered across the lake.
Almost fifteen minutes later a good sized Mekong Catfish of an estimated 20kg’s was finally hoisted onto the unhooking mat.
Further casts towards the centre of the lake resulted in more Mekong Catfish with fish seemingly queuing up for the anglers bait.
In the following few hours Mark successfully landed numerous other Mekong Catfish with weights ranging between 10-20kg’s.
During the course of the days highly productive fishing session Mark also landed several good sized Striped Catfish with weights to a whopping 18kg’s.
At the end of the days fishing Mark had succeeded in landing over twenty individual Catfish with Mekong Catfish to an estimated 20kg’s and specimen sized Striped Catfish to 18kg’s. 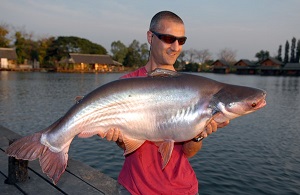