Fishing for Catfish in Thailand

Day three at Bungsamran Lake in Bangkok saw UK angler Mark making another early start in an attempt to catch a Chaophraya Catfish.

With large Chaophraya Catfish regularly surfacing around the lake betraying their presence with their highly distinctive dorsal fins, Mark chose to fish with battered fishballs on super sharp Owner hooks to get around the recent live bait ban.
Large floating bungs were used to suspend the fishballs at depths between 1-2 metres below in the path of the predatory Chaophraya Catfish.
Several aborted takes followed before the angler managed to set the hook into his chosen species.
A large swirl appeared next to the float as the line pulled tight and the fight began seeing the Chaophraya Catfish kiting on a long line towards the central section of the lake.
A spirited five minute battle commenced before the fish was finally landed several yards along the fishing platform.
The Chaophraya Catfish was estimated to weigh 17.5 lb’s and was released shortly after a few trophy shots.
With the sun now reaching its highest point the angler changed back over to conventional Mekong Catfish tactics.
Further casts towards the centre of the lake were rewarded by yet more Mekong Catfish and Striped Catfish with fish to 20kg’s being landed.
The angler caught steadily throughout the rest of the days fishing at Bungsamran Lake and succeeded in landing another double figure haul of monster fish with Mekong Catfish to over 20kg’s and Striped Catfish to over 12kg’s in addition to a bonus Chaophraya Catfish of 17.5lb’s 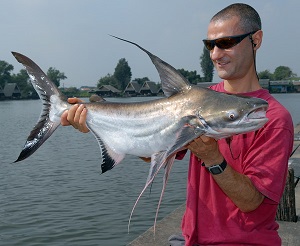