Swiss angler Jonte started his Thailand holiday fishing at Bungsamran Lake for Mekong Catfish.
On arrival at the lake the angler fished from the public area casting out large balls of groundbait to the central part of the lake.

The Mekong Catfish didnt take long to home in on the ball of groundbait and the float was soon being pulled under the surface as the first catfish of the day tore off.
The catfish was beaten after a ten minute battle and estimated to weigh 20kg.

As the days fishing continued the angler steadily added to his tally of catfish catching a fish on most casts.

Towards the end of the day another increase in activity saw the fish switching on again pushing his total to over twenty Mekong Catfish.
The days fishing had been a great in terms of number of catfish captured but did not produce any of the bigger sized catfish on this occasion with the best fish estimated to weigh 25kgs 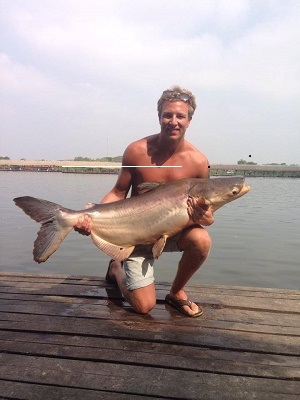