French angler Gerard Parruite joined the Fishsiam team for a marathon twenty three day Thailand fishing holiday which saw him fishing for carp and catfish at Bungsamran Lake in Bangkok, lure fishing for predators at Pilot ponds ,predator fishing at IT Lake Monsters and fishing for both carp and predatory monster fish at Palm Tree Lagoon.
After enjoying a high degree of success at each fishing venue that he visited Gerard arrived at the highly productive Palm Tree Lagoon for a three day fishing trip. During the course of his highly productive fishing session at Palm Tree Lagoon, Gerard landed various species including Giant Siamese Carp, Arapaima and many more weird and wonderful freshwater monster fish.
On the final day of fishing at Palm Tree Lagoon Gerards float fished livebait as picked up by a truly monstrous predator. After an epic arm aching battle the French angler finally netted a colossal Chaophraya Catfish which was estimated by Tim Webb the owner of Palm Tree Lagoon to weigh in the excess of 50kg’s.
The monster Chaophraya Catfish unfortunately was not weighed but left all who witnessed it that it as certainly over the current IGFA record. After a few quick trophy shots the monster Chaophraya Catfish was released back into the lake 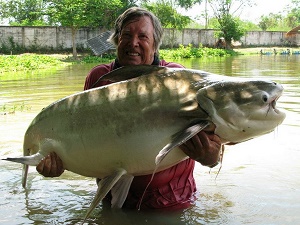