The third day of US angler Li’s Thailand holiday saw him predator fishing at IT Lake Monster.
On arrival at the lake the angler began fishing with bait for the entire day, baiting several quiet spots around the lake with deadbait.

It was not long before the angler was into his first fish of the day in the form of a Redtail Catfish of an estimated 20kg.
Several decent sized Redtail Catfish followed on consecutive casts around the same size each time powering off across the lake.

The morning continued in much the same fashion with lots of action from Redtail Catfish, Pacu and even Alligator Gar.

Li also fished with Tilapia live baits suspended under a float in the later part of the day in an attempt to catch some of the many Chaophraya Catfish showing in the surface layers.

After a quiet spell one of the Tilapia baits fished under a float in the centre of the lake burst into life as it was dragged beneath the surface.
Winding down into the catfish saw line ripped from the spool at a rate of knots as it started a fast run towards the far bank.
On reaching the far bank the fish kited on a long line allowing the angler to regain some control over the fish.

A large quill-like dorsal fin could be clearly seen cutting through the water behind the line easily identifying it as a Chaophraya Catfish.
After a further ten minutes the Chaophraya Catfish was ready for netting and was scooped into the net on the first attempt.

On hoisting the fish onto the bank it was estimated to weigh 35kg and proudly displayed for the camera.

Li continued fishing for the Chaophraya Catfish for the next hour adding one other smaller fish to his haul of monster fish.
At the end of the days predator fishing at IT Lake the US angler had accounted for a thirty fish capture topped by some lovely Redtail Catfish to 35kg and Chaophraya Catfish. 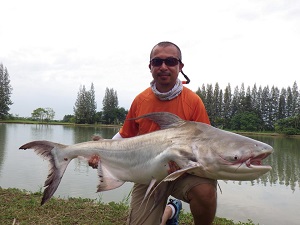