After an early start Bangkok angler Brendan cast his rods into the lake.
Fishing over a previously baited area the angler presented buoyant hookbaits over large balls of local groundbait.
With the morning sun warming the lake bubbles began to fizz up from the baited patch.
A quick finicky take saw the line start to pick up in the water as a fish moved off with the baited hook.
Brendan wound down into the fish firmly setting the hook.
After a short five minute battle a beautiful Common Carp estimated to weigh 15lb’s was brought to the waiting net.
After repositioning the rods the anglers settled down for the afternoon.
An hour later one of the rods powered off with the unmistakable power of a Mekong Catfish!
A thirty minute battle saw Brendan applying as much pressure as humanly possible to keep the fish from the submerged snags on the far bank.
Finally the fish was netted by Boy and hoisted onto the unhooking mat. The fish was estimated to weigh 23kg’s.
Brendan decided to rebait one of the rods with a pop-up choosing a 10mm HBS fishmeal boilee.
After casting the newly baited rod into the lake it was not long before a fast take saw the boiled bait picked up by a small Chaophraya Catfish.
Brendan soon had the Chaophraya Catfish in the margins where it was netted by Boy.
The small Chaophraya Catfish was estimated to weigh 16 kg’s.
The rods were once again rebaited and repositioned over the baited area.
With the lake fishing better in the evenings Brendan decided to rest the swim for a few hours.
Returning to the swim some hours later Brendan recast his rods and heavily rebaited the swim.
After several aborted takes Brendan eventually hooked a Giant Siamese Carp which was beaten after a short ten minute battle.
The carp was estimated to weigh 20lb’s.
Brendan fished for a further hour catching a Black Eared Catfish which was estimated to weigh 14lb’s before retiring to the comfort of his lakeside bungalow. 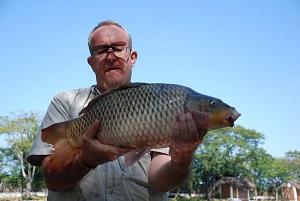