Returning customer Peter Lipah once again traveled to the Maeklong River in Samut Songkran fishing for freshwater stingrays.
The veteran Giant freshwater stingray angler who has possibly caught more Giant freshwater stingray than any other western angler at this time in writing was soon fishing on a wide bend in the lower reaches of the river.
After positioning baits at various intervals in the main flow of the river the angler waited for further developments.
Less than an hour later one of the stout stand up rods indicated a take with a steady knocking on the tip.
With line slowly being taken from the reel the German big fish expert firmly set the hook into an unseen predator 18 m’s below.
Instantly the rod was pulled down towards the rivers surface as a Giant freshwater stingray moved steadily off with the bait.
Applying continuous pressure from directly above the fish soon saw the fish brought up off the bottom where it was played out with relative ease in mid water.
Moments later a Giant freshwater stingray was brought over the waiting net which was quickly secured alongside the boat and taken to the riverside.
On inspection the fish was observed to be a male with a width of 1.2 metres.
After securing the fish in the margins the angler was soon back in position confident that fish were in the immediate vicinity.
Peter did not have long to wait before his next take which would see line being ripped from the spool at high speed!
Once again Peter expertly wound down into the stingray causing the boat to be towed behind the unseen monster fish.
A thirty minute battle followed which saw the boat listing from side to side with every powerful run made by the stingray.
After repeatedly raising the fish from the bottom on several occasions the fish was finally pulled from the muddy substrate and winched towards the surface.
A few fraught moments at netting saw the fish diving back down towards the riverbed in an attempt to evade capture only for the angler to once again haul the fish back to the waiting net.
On the second attempt the fish was finally netted and brought to the riverside where it was identified as being a female with a width of 1.55 metres.
The Giant freshwater stingray was estimated to weigh 90kg’s and retained for scientific examination later in the day.
With only a few hours left of fishing time the angler wasted no time in repositioning his baits.
Two hours passed by all too quickly and the angler prepared to finish fishing.
A slight knocking on one of the rods quickly caught the angler’s eye causing him to wait in anticipation for a run to develop.
A slow ticking sound began to sound as the reel suddenly began to release line.
On winding down into the Giant freshwater stingray it soon became apparent that this fish was a much smaller specimen.
The German angler made short work of the fish bringing a small male Giant freshwater stingray to the net in just over five minutes.
The fish estimated to weigh 15-20kg’s was easily overpowered by the big game equipment and was landed in record time! 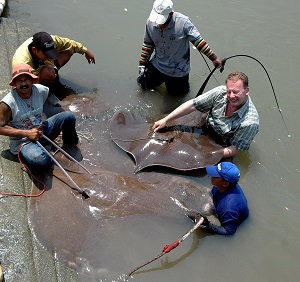