Fishing for Freshwater Stingrays in Thailand with TBS

The Fishsiam team was approached by TBS Japan concerning the filming of a documentary concerning fishing for Giant Freshwater stingrays in Thailand.
After making all necessary plans the TBS production team led by Mr.Yamaguchi arrived the previous evening on a flight from Tokyo.
The television team was assembled at the riverside early in the morning and were soon boarding the film boat to visit the fishing grounds.
The anglers downstream had already called ahead to say that the first stingray of the trip was already hooked.
On arrival at the fishing grounds the film makers were greeted by the Fishsiam team already doing battle with a Giant Freshwater Stingray.
A thirty protracted thirty minute battle followed which saw the fish making a series of powerful runs across the riverbed.
After continually piling on the pressure the stingray finally was prised from the bottom before being fought out in the relative safety of mid water.
Moments later the stingray was brought to the surface where it was expertly netted by the team.
The stingray was quickly transported to the riverside where it was given a thorough scientific examination by waiting scientists from Chulalongkorn University.
After implanting electronic tags inside the fish and recording all relevant measurements the fish was carefully released back into the river.

The freshwater stingray had a width of 1.5m’s and was identified as a large male. The Giant freshwater stingray was estimated to weigh 100kg’s+.
With several more hours left of fishing time the anglers returned to the productive fishing area and began fishing again.
After placing the baits at various intervals across the river the anglers waited patiently for another take.
A knocking on the rod top soon indicated another take was imminent and line slowly began to be pulled from the Okuma Multiplier reel.
Winding down into the fish saw the rod dragged towards the surface as the fish moved quickly underneath the boat.
After repositioning the boat the anglers began to apply pressure from directly above the stingray in an attempt to move the stingray off the riverbed.
On several occasions the fish moved across the riverbed before characteristically clamping onto the bottom with a seemingly unmovable force.
Twenty minutes later the Giant freshwater stingray was finally brought up off the bottom where it was played out in mid water.
The stingray was slowly brought up through the middle layers where it was netted on the first occasion by the team.
The stingray was then quickly taken to the riverside for a scientific examination by the waiting scientists from Chulalongkorn University.
After recording a width of 1.6m’s and implanting an electronic tracker in the fish the stingray was released back into the river.
The Giant freshwater stingray was identified as being a large male and was estimated to weigh 140 kg’s. 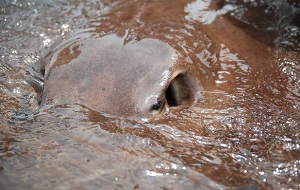